One of Australia's most popular and highly trafficked websites, my tenure at SEEK was nicely bookended with the redesign of their main job search website. 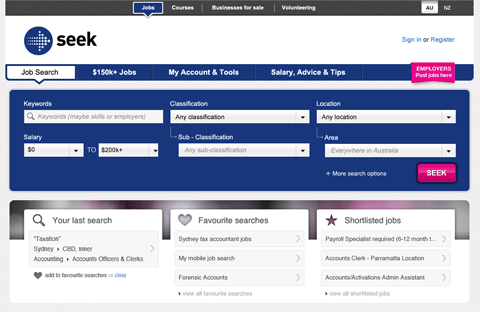 One of the key goals of the SEEK Jobs redesign was to bring clarity and focus to the site. By reducing the reliance on shadows and texture a cleaner, more sophisticated site with a tighter colour palette and solid structure was delivered that remained immediately familiar to customers.

A project that was long overdue, was still however undertaken with little to no available time, budget or resources. And constrained to only what could be achieved via front-end code changes I spearheaded the design based largely off the knowledge of users habits and desires and good old common sense. 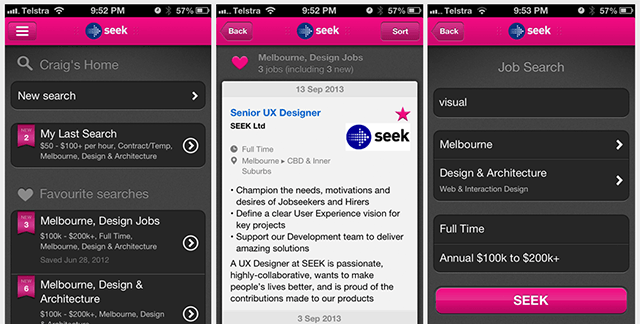 The SEEK iPhone app provided a fantastic opportunity to not only create a very personal experience for SEEK users, bringing the power of the SEEK job search site to their pockets.

But also my first opportunity designing for a mobile device. The amount that I learned and how the experience changed workflows I’d known for years was amazing. 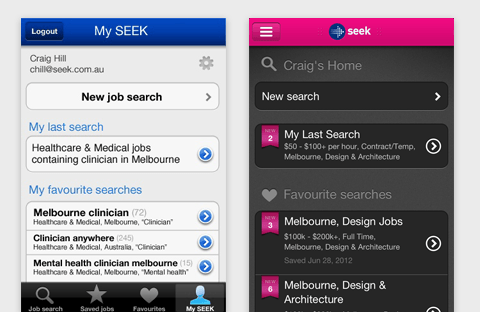 With the SEEK iPhone app I identified an opportunity to reflect SEEK’s offline brand presence in the online space in a way that had never been tried before.

Prior to the app, SEEK’s online presence was white and navy blue while it’s above the line marketing was always pink. As much as SEEK wanted to unify the two. SEEK’s Market place was always seen too ‘sensitive’ for a predominantly hot pink site.

My early concepts were geared around navy blue, however with the iPhone app being a much more personal device the opportunity to use pink was too good to pass up.

Upon release to the App Store the SEEK app went straight to the #1 downloaded app in it’s category and stayed there for several months. While visual styling has shifted slightly in the last year or so the underlying design remains. 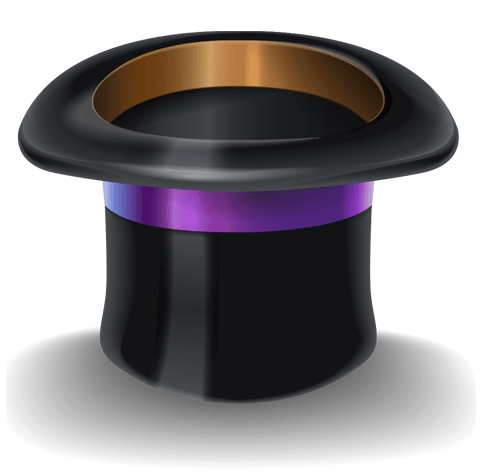 A labour of love in the truest sense – Being a co-founder in Magitest was an invaluable experience from start to finish.

Identifying a nagging hole in the mobile usability testing market, myself and my business partner grew the Magitest app from fledgling idea, all the way to a living app – native SDK and supporting ecosystem within 6 months. 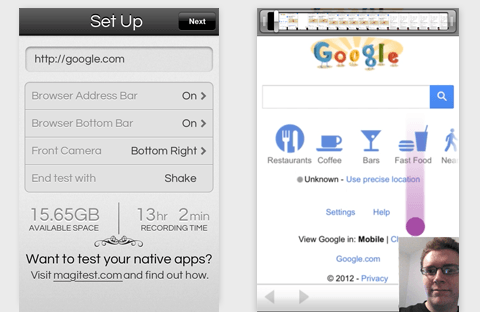 Magitest SDK is an Xcode framework that can be imported into native iOS applications and provide the same test session recording functionality.

During sessions, the device screen, users touch interactions, conversation and via the front facing camera on the device the users facial expressions are recorded. 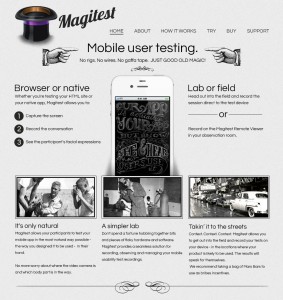 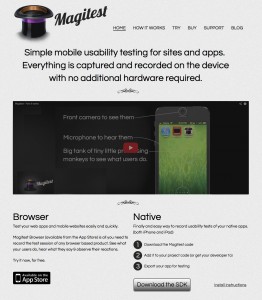 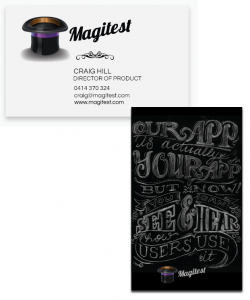 Being such a unique product proved complex for people to fully understand, to help demystify Magitest I produced a short video explaining the difference between Magitest browser and the Magitest SDK in Final Cut Pro.

The video was challenging to produce, but I am extremely happy with the end result. I believe it not only helps explain the Magitest product suite but helps establish the brand as fun and vibrant.

“Magitest is a great concept that has been executed well and I’m certain will change the face of mobile user testing.“

“The low-cost makes it a serious consideration for anyone involved in mobile user testing…Bottom line, grab the app“

Landing in a unfamiliar and highly complex industry was an interesting change from what I had become used to at SEEK, Betfair’s unique offering presented some fantastic design challenges. 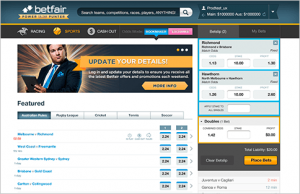 Working in a 2 person UX team at Betfair was a fantastic experience in that it really helped dig deeper in to the earlier sections of the design process.

While revamping the existing Betfair exchange we were tasked with implementing a more traditonal Sportsbook to tailor the Betfair Australia experience closer to what Australian users are familiar with. 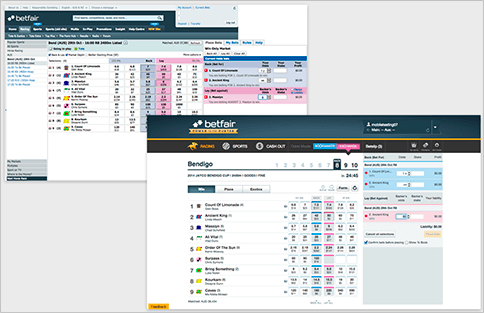 Boasting an already tremendous technical platform with a devout group of ‘rusted on’ customers made changing the existing ‘exchange’ platform a very cautious project.

While it appears looking at the then current offering – any change would have to help, Betfair’s core user group are extremely familiar with it and resistant to change. A good deal of user testing was required to help inform any desicions to ensure a smooth transition.

In the months after launch all “ease of use” and “visual appeal” customer satisfaction metrics were showing significant upward trajectories coupled with large increases in revenues proved the website redesign a resounding success. 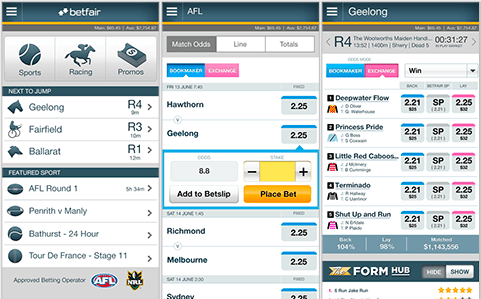 The key goal for Betfair’s mobile offering was to create a seamless functional and brand experience between the two platforms. While interactions and the available screen estate can be vastly different on a mobile device if you can leverage and mirror established patterns from an already familiar desktop experience you have a good chance of easing a users transition between the two.

I worked extensively on key areas like the betslip and market views to ensure that as much as possible both desktop and mobile were closely aligned. 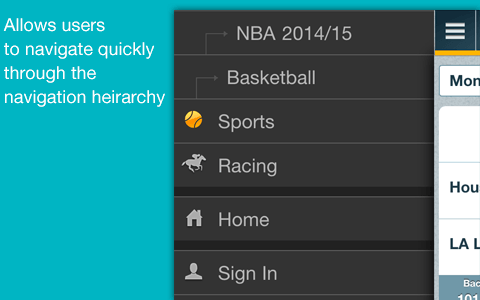 One of the interesting items in the Betfair mobile site is the navigation model within the side menu. By including a reversed breadcrumb stack this gave users an incredibly powerful and quick way to navigate to different areas.

During usability testing users often reacted poorly to the new style of menu, claiming it ‘unfamiliar. Once they resumed tasks, after 2-3 navigation interactions users would invariably find themselves using the stack and had a much more positive reaction. Post release analytics also verified that users were using the system as designed.

“If you think good design is expensive, you should look at the cost of bad design”

Outside of digital interaction design I have also been involved in some branding projects. I love the challenge and reward of expressing as much of a businesses story through as simple a form as possible. 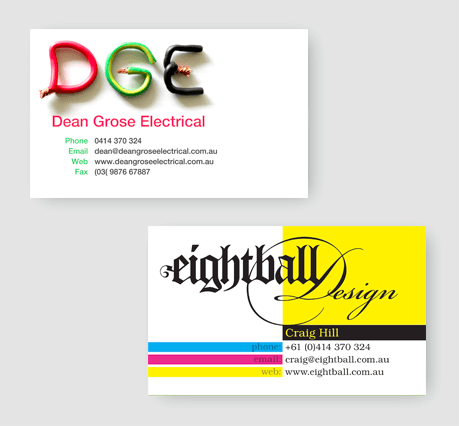 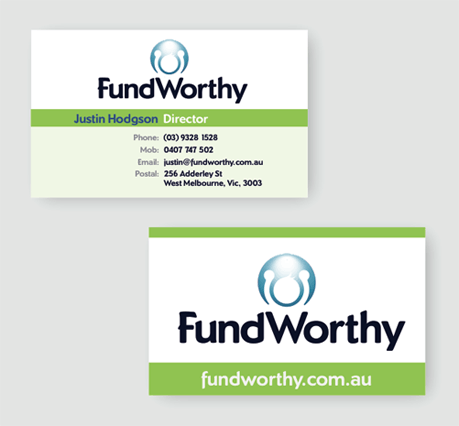 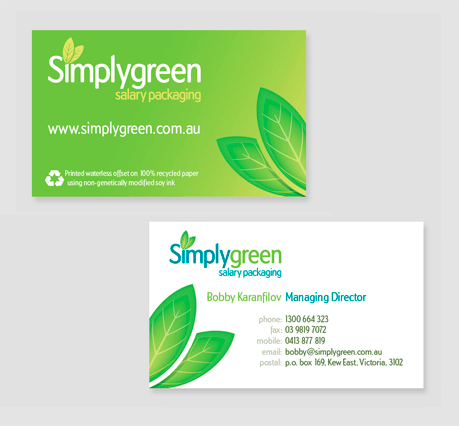 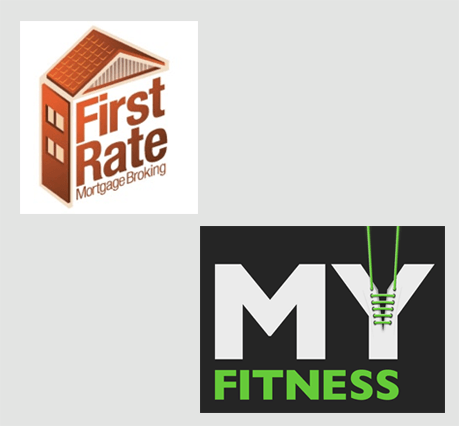 There is undoubtedly a direct correlation from all the skateboard deck designs and heavy metal album covers I coveted in the 80’s and what i do for a living today. As other students spent their school years actually studying the materials of the class they were attending I was filling endless folders with drawings straight off an Iron Maiden cover.

It became clear very quickly that I wasn’t going to be happy doing much else with my life than drawing pictures, I have found a happy medium in the design world to satisfy this urge, however, to this day I still draw ridiculously stupid pictures almost every day.

Thank you for viewing my work.